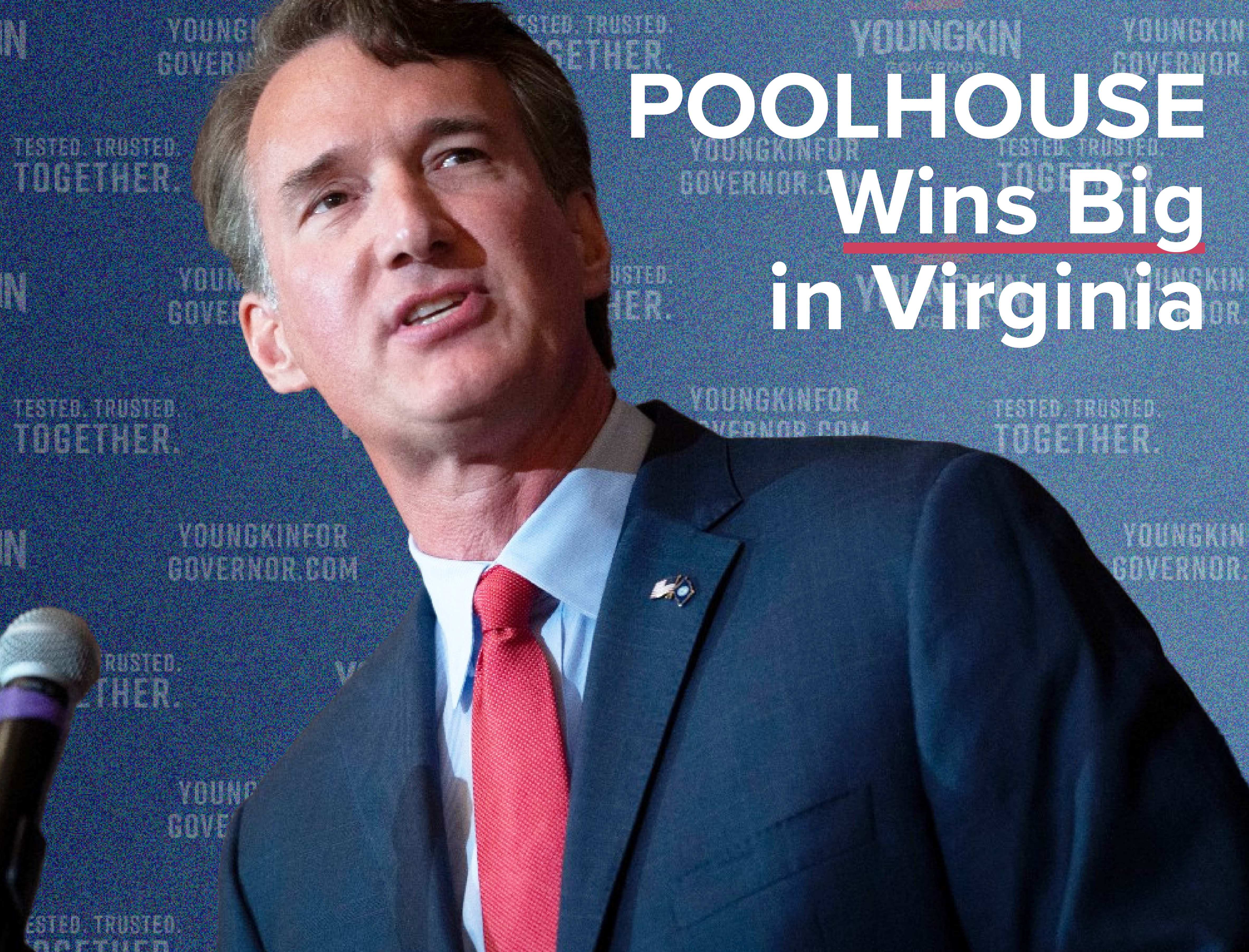 POOLHOUSE is proud to have served as the media consultants for the historic Youngkin for Governor campaign and some of the most crucial races responsible for capturing the House of Delegates Majority on November 2nd.

On the top of the ticket, Glenn Youngkin, a political outsider and successful businessman achieved the first statewide republican victory in over a decade. Major news outlets across the country are heralding the shocking victory as the “GOP winning blueprint for 2022 and beyond.”

“It is an honor to work alongside one of the best campaign teams in politics and help elect Glenn Youngkin,” Will Ritter, CEO of POOLHOUSE said. “Glenn is a once in a generation candidate. His positive, unifying vision for the commonwealth swept through Virginia, increasing vote share, relative to the last election, in almost every major demographic and geography . Our team looks forward to continuing to help and we can’t wait to see what the future has in store for Governor-Elect Youngkin.”

“Good ads matter. Good strategy matters. But you don’t win unless you have a great candidate.” Tim O’Toole, Chief Creative Officer of POOLHOUSE said. “Glenn created a movement and our job was to articulate and amplify that message with creative, emotional and compelling advertising; bold enough to cut through the noise. Glenn’s life has been spent turning things from good to great, and next on that list is Virginia.”

In addition, POOLHOUSE served as the general consultant and media consultant to races crucial to Republicans capturing the House of Delegates’ Majority, like Mike Cherry in Virginia’s 66th District. Despite being outspent and running in a Biden + 11 seat, Cherry won a decisive victory – outperforming former Del. Kirk Cox’s margin from 2019 with significantly less resources.

“It’s truly been an honor to work with the incredible team at Youngkin for Governor and work with all these winning candidates up and down the ballot in Virginia,” Danny Laub, a Partner of POOLHOUSE said. “The future is bright for Republicans across the country willing to tell their story and fight for conservative ideas.  We are proud of all the campaign staffs, candidates and teams who made these historic victories happen. POOLHOUSE is just getting started and can’t wait to see what 2022 has in store.”

POOLHOUSE also served as the media consultant for John McGuire’s re-election in the 56th and for A.C. Cordoza, who flipped the 91st – a majority-making win in the battle for the House.

Lastly, we were pleased to provide independent expenditure services on behalf of the RSLC and NFIB, contributing to flipping the House of Delegates.

POOLHOUSE first sat down with Glenn Youngkin in late 2020 to develop the campaign’s creative strategy. One of our first tasks was to design an iconic logo to represent a once-in-a-generation candidate running a different kind of campaign. The announcement was coming up fast, so our team accelerated our process to produce a variety of logo directions. This facilitated a conversation that not only helped us finalize an awesome logo but also brought clarity to the way we’d introduce Mr. Youngkin’s campaign.

When working with tight deadlines, we typically start broadly and quickly narrow down our options. You can see we were casting a wide net with some of the early concepts. 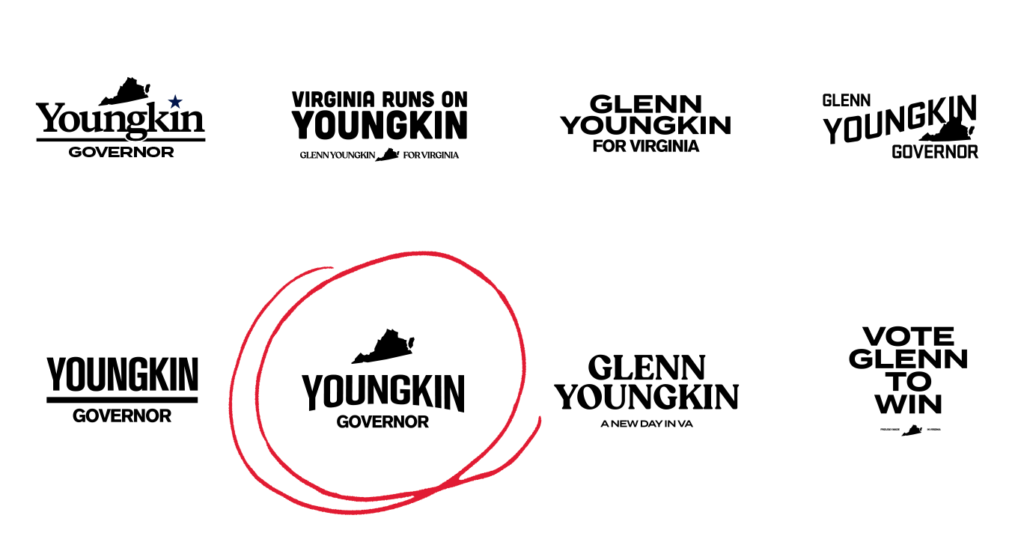 The most important attributes of a candidate logo are name recognition, scalability, and legibility across mediums (like at high speeds on a billboard or in the corner of a tv screen). The solution we arrived at did several things well.

For starters, the primary wordmark was the candidate’s last name in a bold san serif font. Paired with a red-white-and-blue color palette and VA state shape, it helped boost name recognition in the context of a candidate seeking elected office. We often try to break the mold, but it’s important to remember that familiar elements help voters make quick connections that are extremely valuable. 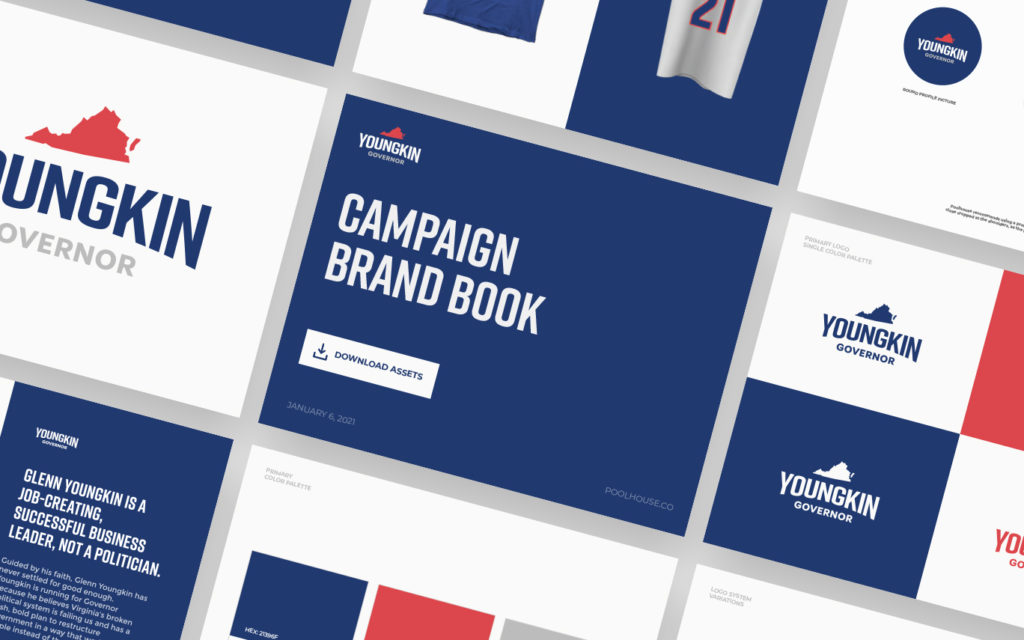 Next, we built a brand book so the campaign could scale consistently to digital, print, web, and merchandise even in its early stages. This gave every vendor quick access to logo assets and Pantone colors, which is why you saw it so consistently applied all over VA. Over time we expanded it to include rules for step and repeats, coalition branding, billboards, and on-screen animation. 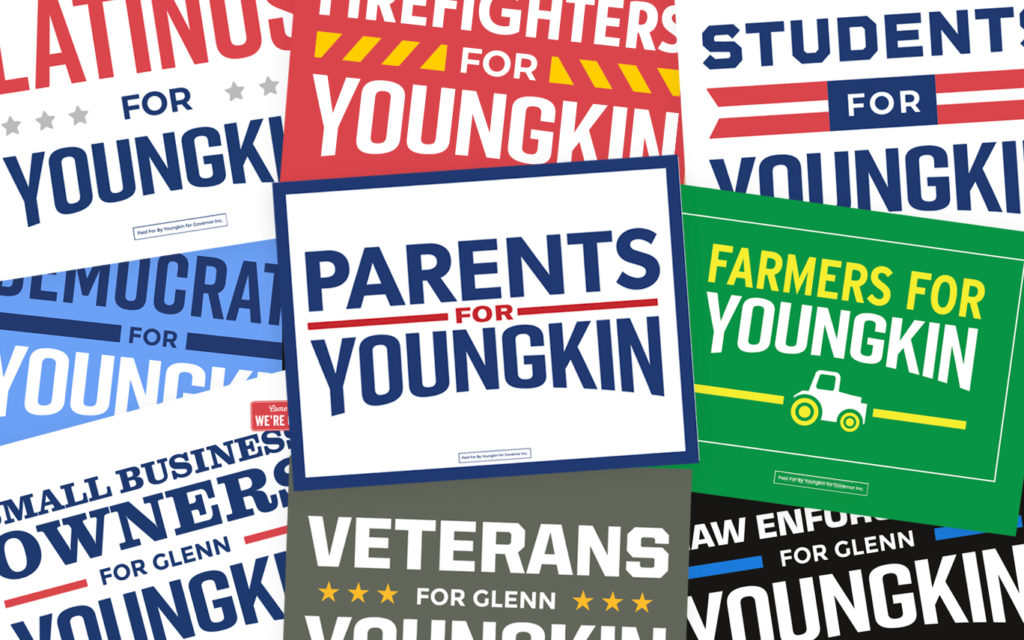 Finally, we put a premium on legibility. Opting to keep the logo as simple as possible meant we’d need to work in meaning subtly without relying on embellishments and symbols. The arching baseline of the Youngkin logo is meant to evoke a rising sun, representing a new type of candidate and a new day for the commonwealth of Virginia. This subtle design element made the logo unique enough to stand out, and clear enough to be instantly recognizable. 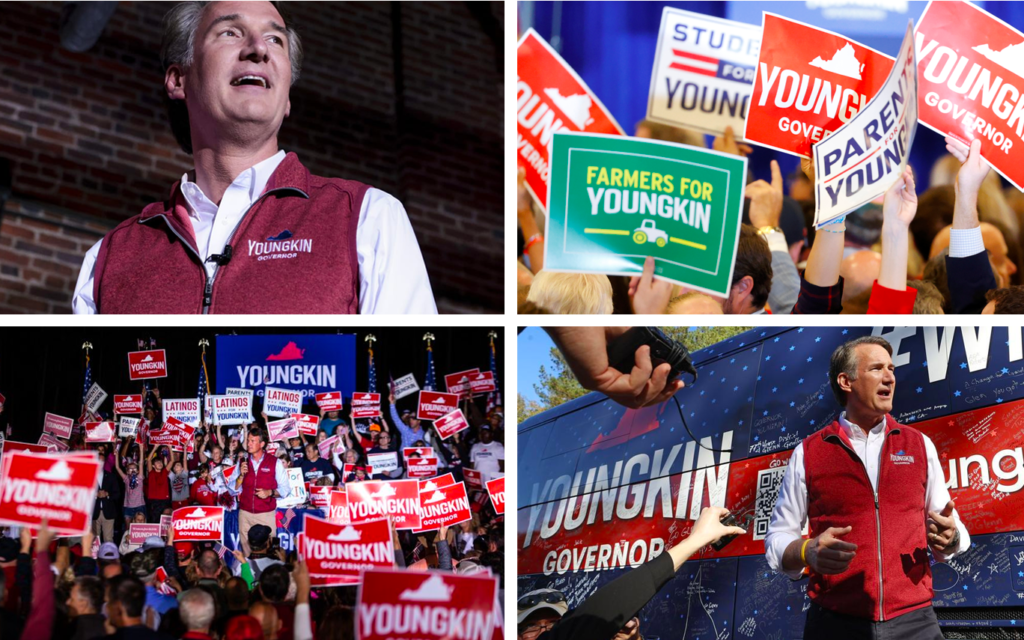 The logo that we created was more than a design element. It became a symbol that people across the commonwealth of Virginia proudly adopted. A symbol of hope, pride, and promise that we wove through 40 statewide TV spots over the convention and general election campaigns, as well as hundreds of radio, digital, and design advertisements.

Want to talk with us more about our comprehensive strategy, branding, and marketing services? Click here to reach out.